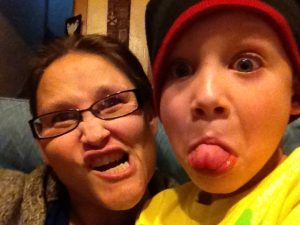 I’m falling down on the job.  I suppose being this many weeks (37.5-ish) pregnant allows me a little leeway, and yet, I hate not sticking to something I’ve set.  Oh well.  To quote The Princess Bride, “Get used to disappointment!”

The “Aargh” of this week?  I have tried to make my Dad’s Greek yogurt…twice.  Neither time did it set up for me!  The first time I put in vanilla extract.  Hmmm….did the alcohol kill the yogurt culture?  (While we’re on seemingly unanswerable questions, who killed the electric car?)  Anyway…I tried again with no vanilla extract.  Still no set.  Thankfully, W asked for a taste, and he and AB have been sucking it through a straw like there was no tomorrow.  Whew!  I really didn’t want five bucks going down the drain.  Who am I kidding?  I would have found something to do with it.  Chocolate cake comes to mind.  Like I need that right now!…maybe I do….of course, I’d need the energy to actually whip it up.  Ha!  I don’t even have the energy when I actually drink coffee.  This growing a baby stuff (particularly at my age!) is exhausting work!  🙂

To move onward — I made Almond Butter this week!  No, I wasn’t hungry for Almond Butter, didn’t make a recipe that required it.  I just got a hankerin’.  Yes, a girl is allowed her hankerin’s.  🙂  Here’s how the crazy thing transpired — I was looking at the Azure Standard website trying to come up with our order for this month.  It was a good thing my sisters were interested in getting produce and powdered milk because we didn’t get wheat this month.  I wasn’t sure how our $50 order was going to come together!  Anyway, I thought of nuts.  Nuts are so very good for you — good fats, proteins!  And they’re pretty yummy to boot!  My thought was, if I can get peanuts in bulk for a good price, then I’ll just make my own peanut butter.  I found that, since I’m not die hard for getting organic, that I could get peanuts cheaper at Sam’s.  Ok.

Then I remembered that I bought a HUGE bag of raw almonds at Sam’s a long time ago.  (That’s not as bad as it sounds — apparently nuts should keep alright in the freezer for up to three years.)  I have been wondering what in the world to do with the almonds — just snacking on them has not been a great option.  They require a LOT of chewing, and that makes my jaws unhappy.  (Boo for wicky TMJ!)  Almond Butter.  Of course!  I got out my handy-dandy second hand food processor and threw in two cups of almonds.  That’s it.  Here’s the “funny” part — I gave the kids a heads’ up that it was going to get loud.  Naive me had no idea exactly how loud!  The initial whirring of the nuts in the food processor was DEAFENING, and scared the wits out of my poor children.  W ran to hide behind the recliner with his hands over his ears.  AB just stood there, hands clapped up on her ears with her mouth gaping open in surprise.  Yikes!  That lasted as long as it took me to turn the crazy thing off.  Whew!  I finished it later when the kiddos were in the playroom with the door closed.  (We have a closed circuit video feed from there to the kitchen, so it’s not as bad as it may sound.)  It took a LONG time to get it finished.  I say “LONG time,” but it’s all relative.  It probably took about 10 minutes of processing to get it to the consistency I wanted.  I think that’s longer than peanuts take, but I don’t have personal experience to pull from.  It now sits in my fridge and waits to be used.  I’ve been putting it in oatmeal instead of peanut butter, and AB loves to just have a “bite?” of it whenever she sees it out.

Next time, I’ll probably add a little salt…and maybe a little peanut oil.  The almonds, after all, have been in the freezer for longer than I can remember.  (Not that that is saying much at this point — I have two toddlers and I’m about to pop out a third munchkin.  I’m happy when I remember to…wait, what was I going to remember?  Dagnabit!)

So…in the grand scheme of things, the Almond Butter is more on the frugal side of things.  I was looking for a healthier, hopefully cheaper way to go than store bought peanut butter and ended up using something I already had to meet that need.  That makes me smile and a little bit proud of myself.  🙂  Being frugal is a great “game” to play.  I think I get that from my Mama — and that really makes me smile.

That’s been it for this week.  We had coupons for free pizza from Papa Murphy’s, so we’ve correction, Hubby’s been eating on that this week.  The kids and I are doing well with PBJ and oatmeal and cheese & crackers and apples and oranges and yogurt drink among other things.  I have no idea what we’ll be doing for dinner tonight.  Once the evening hits, I’ve been pretty useless.

I’ll try again next week.  Granted, it’s Spring Break and time to “Spring Forward,” so that throws a curve ball into things!  AND, I’ll officially be 38 weeks along.  Oy.  This, too, shall pass.  🙂

May you have a lovely rest of your week!

This article was first seen on thisgranolamama.blogspot.com – another one of my blogs!