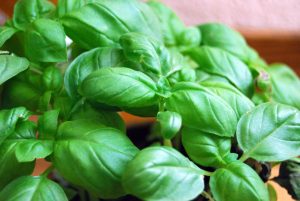 Another first — I made homemade pesto last night!…and I mean the real deal, not a Knorr packet or some other such substitution with things in it that I struggle to pronounce.  (Don’t get me wrong — I’ve made my share of packet pesto.  This beats its socks off!)  Nope, this is a relatively quick recipe that I got off a box of Ball jars….that I had to slightly modify because their instructions resulted in black smoke billowing out of my oven!  Forgive me, I get ahead of myself.

I thinly sliced some chicken breast and cooked it up with some evoo and salt & pepper while the pasta water was coming to a boil.  I cooked up some spaghetti (next time I’ll use angel hair), and when it was cooked al dente, I added it to the skillet with the chicken, threw in about half a cup of pesto and “tossed” it together.  It was ridiculously yummy!  I made a caprese salad to go along with it.  The only thing that would have made it better would have been homemade french bread.  Oh yes.

When I had the leftovers for lunch today, I added in quartered cherry and grape tomatoes.  That sent it over the top…and it made it look a little Christmas-y!  Christmas in June?  I think I can live with that!

I know there are scads of other pesto recipes out there — if you have a favorite, do share!  I LOVE new recipes!

This article was first seen on liferegardless.org — another one of my blogs!