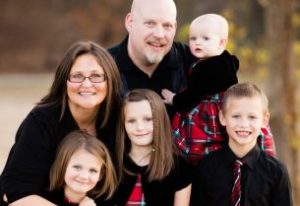 I never figured myself for a “Granola Girl.”  Not the eatin’ kind, the lifestyle kind!  (I’ll post my Granola Recipe & you’ll see, I’m all about the eatin’ of the granola…and now, the making of it!  Hold on, though, I’m getting ahead of myself!)

Not that I’ve ever been a girly-girl.  Yikes!  Heaven forbid.  (Don’t get your panties in a twist — I have nothing against girly-girls…in fact, I have three on my hands!  AB loves pink and skirts and anything sparkly, EJ piles on the jewelry and as many barrettes as her sweet head will hold, and ACE?  she loves scarves, but at 15 months, who can say?…*sigh* 🙂

Before I had kids I bought pre-packaged food and didn’t think twice about it.

Before I had kids, I never really thought about what was in my cleaners.  If it did the job well and quickly, wahoo!  Who cares if I had to open the window so that I could breathe?  I mean, really!

Before I had kids, I was too timid to try making my own yeast bread or yogurt or kefir or, or, or….

Before I had kids, the thought of grinding my own grain was ludicrous, and now I have  wheat berries just waiting for me to grind them and make them into yummy baked goodies.

Before I had kids, I was convinced there was no way that I’d do natural childbirth, and it wasn’t until after my first that I even considered trying.  (I’ve done it three times now – even once at home!  I’ll share my stories on down the road.)

Before I had kids, there was NO way that I was doing cloth diapers.  I’ve actually spent several hours doing research on it.  (Granted, it’s moved from the “No way in hell!” category to the “Maybe we could do this” category to the “Nope.  Not in this lifetime.”  HaHa!)

Before I had kids, I was a public elementary school teacher who planned on sending my kiddos to public school, and now we’re going to start homeschooling this next school year.

Life has turned out differently than I had planned, and really, I’m good with that!  My steps have been ordered by the Lord, and He has put my boundaries in pleasant places.  My husband and I are so very thankful for where He has led us and placed us.